A Legal Take on Ryan Braun 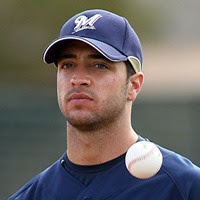 Vice President, National Organization for the Reform of Marijuana Laws

After being exonerated by major league baseball yesterday from his potential suspension, Ryan Braun owes all fantasy baseball players an apology.

In his press release acknowledging the support he had from his family and friends, he forgot to thank all those early-drafting fantasy players who stood by him and selected him in the top 20 picks. After all, as the NL MVP he was one of baseball's best players in 2011.

But now let me speak as a constitutional rights lawyer. Neither a technicality nor a loophole today freed Ryan Braun from a 50 game suspension. What saved Braun today was the fact that we leave in a society which is supposed to preserve due process, insure fairness, and honor agreements protecting the rights of employees. Baseball is no different. Players are very well paid obviously, but as Curt Flood, challenging baseball's free agency system years ago once stated, 'A high paid slave is still a slave.'

Today, baseball players are hardly slaves. Free agency has given them vast negotiating rights, but that does not change the fact that drug testing procedures in America are inherently flawed. Every day, using a substantially compromised field test, cops arrest innocent people for purportedly carrying contraband that turns out not to be so. The list and litany of false positives could and do fill a book, and I cite a few examples in a link at the bottom of the page. Beware of Dr. Bronner's natural, herbal, liquid soaps. They could put you in jail.

Nevertheless, in this era of steroids and performance enhancing drugs, major league baseball players and its management negotiated drug-testing protocols to insure the integrity of the game and trust of its fan base. However, as lawyers for the players sat down to work out the drug testing initiatives, it was imperative that mechanisms and processes be implemented that would insure the integrity of drug testing and fairness for both sides.

Scientists and lawyers had seen for years a panoply of poorly administered procedures which compromised the accuracy of results. These included a variety of situations, from not properly storing drug specimens at specific temperatures, to failing to initiate a timely testing of the sample. The reason meticulous guidelines and standards were imposed for all drug testing was because the failure to do so would render the test inherently unreliable, and could very well lead to false positives wrongly accusing an otherwise innocent individual.

This is not about a player getting off. This is about a contract being honored; about both parties being faithful to the rules and regulations they mutually negotiated before a player’s career could be interrupted and his reputation irreparably stained.

It is not that drug testing lost today. Fairness won. It is not a technicality that saved Ryan Braun. It is that we as a society have preserved due process, and the same procedures that have been used to affirm a dozen previous rulings on steroids, have now been applied to exonerate one. That is the way it should be when one side does not abide by its agreements. This time, it was the owners that lost, but neither did baseball win.

What won was the right of a censured athlete to argue an appeal and mandate that the landlords of the game respect the rights of its tenants pursuant to the terms of a lease they mutually negotiated beforehand.

For more information on how drug testing procedures in America are flawed, visit this article I published at http://jaablog.jaablaw.com/2011/08/18/field-drug-tests-fa.aspx It is hard to believe a bar of chocolate or some herbal incense can put you in jail, but in our Amerika, it still can.

As for Norm Kent, the fantasy baseball player, I should have known better. I should have had more faith in my own words, and drafted Ryan Braun in the freaking first round. My bad.