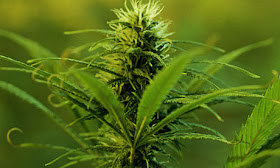 The city of Wilton Manors has decided they will not oppose my law firm’s sign being placed on a Wilton Drive Bus bench.

If you missed the controversy last month, Wilton Manors had initially forbidden my bench ad because of the pot leaf in it (see below). If you are “busted,” you are encouraged to call the Criminal Defense Law Center of South Florida, which is the fancy name I have given my law firm.

My law office partner, Russell Cormican, and I, decided to advertise the firm’s new name and logo, and our move to a new office in the Legacy Bank Building. Often, we represent good people charged with criminal acts because of stupid laws, which long ago should have been discarded.  None are more glaring than those arrested for the use of marijuana.

Take Elvy Mussika, a Hollywood woman who grew and smoked her own pot in order to counteract glaucoma, which was causing her to lose her eyesight.  After 23 operations to remove cataracts, she discovered that the THC in marijuana reduced the intraocular pressure in her eye canals, enabling her to see without surgery.

Faced with a cultivation charge 25 years ago, in 1987, she challenged the State of Florida, saying she had a constitutional right to see, and argued her possession and use of marijuana was lawful, based on medical necessity. A jury agreed, 24 years ago today, and we won the case. Now, Mussika is one of many activists who will attend the Seattle Hempfest this weekend. In fact, far away in the northwest corner of the United States, over 150,000 pot warriors will gather at Myrtle Beach State Park in Elliott Bay to demand the legalization of marijuana.

One of the people that should be there with her is Boynton Beach resident Robert Platshorn, 69, the leader of The Silver Tour, fighting to educate senior citizens about the medicinal uses of marijuana — how it is an alternative to traditional therapies, with less residual consequences. In 1987, he was in jail.

Unfortunately, Platshorn served the longest sentence in America for marijuana — over 30 years — but he is still a victim of America’s drug war. Still under federal parole supervision, it seems that the government is now questioning his right to attend festivals promoting the decriminalization of marijuana.  He is working for drug law reform. The federal government is insisting on drug war compliance.

Like Elvy Mussika, Platshorn will eventually prevail, because Truth cannot be suppressed or silenced by government agents acting foolishly. It blows up in their face and Justice eventually emerges. If you want to help fight for Platshorn’s cause, you can go on Facebook and help fund his remarkable video, “Should Grandma Smoke Pot?” You can write to the Parole Commission and tell them to let him travel. And you can read his book, The Black Tuna Diaries.

Unfortunately, the national media does not adequately cover the marijuana activist movement in America. If it did, you would know that over 18 states in America and the District of Columbia have decriminalized marijuana.

You would also know that in each and every place where a decriminalization bill gets on a ballot, it wins — almost everyone today 35 and older has smoked pot, and everyone 16 and older is willing to try it. And Platshorn is showing how marijuana is medicine for seniors.

In different decades, both Mussika and Platshorn have stood alone fighting battles against injustice and a legal system that has been far too harsh and cruel to marijuana smokers. Though 25 years apart in their dilemmas, they are inextricably woven together by a thread of injustice fostered and furthered even today by the Obama Administration.

In California, medical dispensaries for marijuana users have proliferated by virtue of local ordinances and state laws allowing for the same. Sadly, tragically, and I dare say moronically, the Obama Administration has engaged in an all out war on those dispensaries and lawfully licensed businesses.

Disregarding the people’s will, the U.S. and its Department of Justice have raided the establishments, seized the inventory of medicines that were going to be provided to patients, and even arrested numerous owners who had in good faith opened businesses according to local laws.

As an activist who has spent 40 years fighting for the decriminalization of marijuana laws, I have found the acts of the Obama Administration unconscionable, unjust and unacceptable. It is flat out the reason why I will not support his re-election, despite his noble and forward record on LGBT civil rights. Gary Johnson, the former governor of New Mexico, is most likely to get my vote even though he has not gotten the national media attention he deserves.

Nationally, the National Organization for the Reform of Marijuana Laws (NORML) is carrying on a battle originally engaged 40 years ago when its founder, Keith Stroup, first called for an end to prohibition by 1980. Locally, a small group of activists is petitioning the city of Miami Beach to decriminalize pot, but it is a strong and vocal chapter you can also find on Facebook, led by a middle aged mom, Karen Goldstein, who saw her own roommate once unjustifiably arrested for using marijuana while fighting a disabling multiple sclerosis.

When it comes to marijuana, there is injustice on every corner. So that sign on Wilton Drive is where it needs to be, and no city is going to tell me I can’t have it there as long as their cops perpetuate the inequity of the drug war.

The only danger facing a pot smoker sitting on that bench is not from the weed but from a speeding drunk driver who hits him while he’s just sitting there.