All We Are Saying is 'Give Pot a Chance' 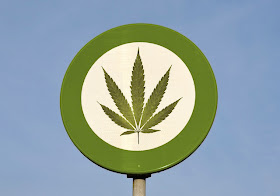 The mainstream view is to now decriminalize marijuana entirely, or allow for its distribution to adults legally. In fact, more than 70 percent of Americans support, at the very least, legalizing medical marijuana. Last year, citizens both in Colorado and the state of Washington voted for legalization. It is amazing what can happen when you close the curtain in that voting booth. We are developing a national recognition the ‘drug war’ has been a failure.

For decades, politicians running on ‘law and order’ campaigns were afraid to speak out about unjust drug laws, for fear of being perceived as ‘soft on crime.’ Consequently, they supported sending people to the joint for smoking joints. Florida is one of the more archaic states. Just a little more than a half an ounce of marijuana is still a felony, which can cost you not just your freedom, but expose you to losing a job, college scholarships and having your car forfeited. That is ludicrous.

In Florida this year, though, medical marijuana initiatives will be presented to the state legislature for consideration. Last week, in the Sun Sentinel, even conservative columnist Kingsley Guy suggested our nation’s drug laws be reconsidered. Leonard Pitts did so last year in the Herald. Encouraging and responsible voices for decriminalization are emerging everywhere. Across the nation, legislators or citizens in over 18 states have now voted for decriminalization or medical use. The wave has arrived. Let's all ride it.

Statistics for national marijuana arrests are kept by the FBI. In its last report, for 2011, 757,969 arrests for marijuana were reported nationwide- and over 663,000 of them were for simple possession. But in progressive states, where dispensaries are allowed and decriminalization has been advanced, arrests are down and society is not compromised. The trains still run on time and the world has not crumbled. In fact, new cottage industries are springing up for 'medibles,' herbal uses, and natural homeopathic uses for cannabis.

Three decades of harsh drug laws have done little more than institutionalize racism into our justice system. Statistically, minorities have always been incarcerated at a drastically higher rate than their Caucasian counterparts. But if you think Americans love guns, we love jails more. In fact, we put people in jail at 5 to 10 times the rate of most countries in the world, including all the democracies in Western Europe. But locking people up for smoking a joint is asinine, and must come to an end.

Last week, an appellate court stupidly refused to reschedule marijuana, maintaining its classification as a harmful drug with no respected medical uses. The decision employed strained logic and lacked common sense. It ignored documented studies establishing the medicinal uses of cannabis historically and presently. It will be used as a tool for continued repression and arrest. Hopefully, a higher appellate court will vaporize that ruling.  It was forty years ago that a Presidential commission had the foresight to recommend decriminalizing marijuana. Instead, our nation launched an unconscionable drug war against innocent citizens. That war is not against drugs. That war is against people, and it has inexcusably compromised our civil liberties.

None of this makes any sense in terms of public safety, health or fiscal policy. Federal crackdowns have not curtailed the ever-growing and omnipresent trade in marijuana. However, legalizing marijuana, or even allowing for medical dispensaries, will enhance urban and rural tax bases, and provide medical marijuana to those who need it. The federal government should defer to those states now doing so, allowing them a chance to see if this new approach won’t work successfully. If it can save lives, cut prison costs, generate tax revenues, and expand our essential freedoms, we ought to ‘give pot a chance.’

It is time for courageous community leaders and politicians to speak out against unjust marijuana laws, especially since most of them have smoked pot themselves. And look- they have grown up to become respected realtors, entrepreneurs and even educators. Let’s get real about pot. If you are a member of a local city commission, you should be directing your police agency to make pot arrests their lowest priority.

If Republicans really want to espouse core values such as individual liberty and states’ rights, along with economic opportunity, they should join in the emerging common sense approach to decriminalizing marijuana. If Democrats want to stand up for equality for all classes of citizens, and ending social injustice, they should also be proposing laws for responsible adult use of marijuana.

The decriminalization and legalization of marijuana is and has always been a cultural and political struggle. The laws against public legal consumption were never in the public interest. They have been tools to silence dissidents, minorities, and young people living outside the mainstream.  The federal government has always been the bully. Well, it is time we started passing anti-bullying laws.

The gay community should be especially concerned as well. Informal polling in the LGBT community shows not only 80 percent support decriminalization, but routine use and social acceptance, from age 22 to 82. Less than a month ago in an emerging gay-centric community in South Florida, Wilton Manors, a 75-year-old retired Harvard professor was taken to jail for smoking a joint in his living room. The laws would be a joke if they did not fashion such an injustice from coast to coast.

If pot smokers had come out of the closet with the courage and numbers that gay and lesbians have, we would be further along the path to legalization. But maybe the LGBT community can do for cannabis activists what they have done for themselves- stand up and be counted. Gay men and women should actively support and join the growing nationwide movement for marijuana legalization.

You ought to be able to put into your body what you want, whether it’s a partner’s private part or a joint you rolled. As the Supreme Court justices wrote in the landmark case defining gay rights in Texas just a few years ago,  there is a sphere of civil liberties beyond government control. That is the fundamental premise of our constitution, and it is one we should always fight for. It is not about the pot. It is about your right to choose. As gay men and women, we should always choose free choice as our governor. As American citizens, we should embrace those who do so as well.